These are very popular tapas served in bars along the northern coast of Spain. Usually they are stuffed with either ham or shrimp or, simply, the mussels themselves. Even for those poor people who are adamant about disliking mussels will find these little things delicious.

When shopping for mussels, look for those that are tightly closed. If some are open, give them a tap with your knuckle. If still they remain open, they are likely dead and not useable. To store them, rinse them in cold water. Put them into a colander, inside a large bowl, with ice or a damp paper towel over them in the fridge. Do the alive/dead test again before cooking them.

I buy Hama Hama mussels, a native species of the Puget Sound and harvested in Hood Canal, from the farmer’s market. For those in the Puget Sound area concerned about the Penn Cove mussels affected by the diesel spill, you may be interested in buying these, instead.

For the Mussels and Their Broth

Scrub the mussels under cold, running water. I use a nail brush, but you could use your fingers or a dish brush. Pull away any of the beard. If there are barnacles on them, leave those on. The barnacles produce a much richer broth. When they are cleaned, put them into the pan and cover.

Put together a bowl with ice.

Set the pan over high heat. In about three minutes, the steam will be pouring out. At that point, open the lid and remove the mussels that have opened. Mix them immediately into the ice. If some mussels haven’t opened, put them back on the heat with the lid for a minute more. If still they haven’t opened, use them anyway by prying them open. I am not bothered by stubbornness.

Remove the mussels from their shells. Put about half the shells back into the broth, preferably the ones with the most barnacles, and any baby mussels too tiny to use. Simmer the broth over medium heat for 15-20 minutes, uncovered, until it’s reduced to about a cup. Strain and cool.

In a skillet, heat the olive oil over medium-high heat. When hot, add the onions. Saute until translucent, a couple minutes. Then add the garlic, giving the pan a shake, and finally the mushrooms. Add the sea beans (or minced parlsey). Cook for a minute, then deglaze with the wine. Remove from heat. Stir in the fresh thyme leaves and lemon zest. Mince the mussels and add to the onion mix. Stir, taste and correct for seasoning with salt and pepper. Set aside to cool.

Heat butter in a sauce pan over medium heat. When melted, wisk in the flour. Let the roux cook for a couple minutes until the flour aroma softens. Little by little, add the cold milk. Wisk constantly to prevent lumps from building. It will be pastey at first.

Once the roux has absorbed all the milk, stir in the broth little by little. When the liquids and roux are combined, and no lumps remain, let the sauce simmer over medium-low heat. Stir it once in a while. It should be thick, but not too thick — a bit like gravy.

Remove from heat and add the white pepper and salt, to taste. You will make more than you need, so be sure to save the rest and use it as a topping for fish, eggs or biscuits. It goes great with rice too.

Scoop the stuffing into the shells. Then spoon the sauce over them. Don’t worry about being messy; sauce will fall off and get all over the shells. The sauce helps keep the stuffing inside when you fry it. In Spain, often the mussel stuffing and cream sauce are mixed together. You can do this too. I prefer to taste the morels and mussels, though, and that’s why I have done it like this here. 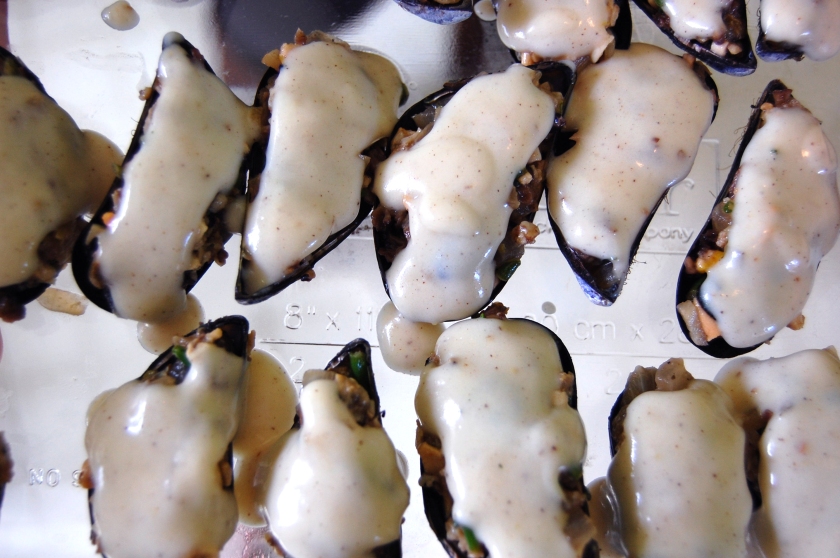 When all the mussels are prepared, place them in the freezer for a couple minutes to let everything settle. Meanwhile, prepare the breading and egg. Beat the egg in a small dish and set aside. Mix together the breadcrumbs, cheese, salt and pepper. When the mussels have relaxed, remove them from the freezer. In a skillet, heat the oil over medium heat. One by one, coat the mussel with the egg wash then with the breadcrumbs — one hand for each action.

When the skillet is hot, add the mussels stuffing-side down. You can test the oil by either sticking the end of a wooden spoon in it or dropping a couple breadcrumbs into it; both should bubble. Fry the mussels for just a couple minutes, until they brown. Flip and fry one minute more. 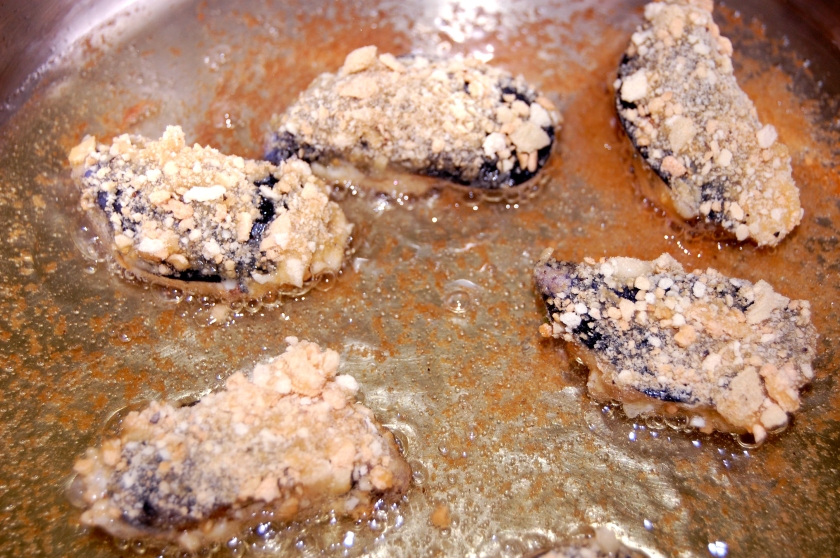 Pull them away and wipe away the grease. Garnish with Spanish smoked paprika and serve immediately. 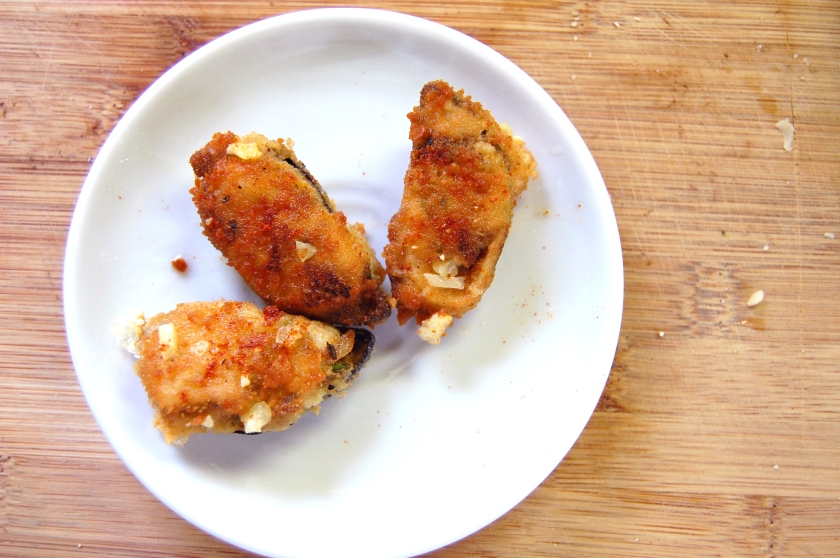 A LITTLE WORD OF WARNING: Some people I have served these to don’t realize there is still a shell. Unbeknownst, they take a chomp of it. So, it might be worth it to let your eager eaters know. Besides, they make a beautiful scraps.

I have lived all over the country and traveled to different places. One thing that stays the same is my fondness for local food. It always reminds me that there is no one right way to do something in life. A carrot can be like this or that, or a legal opinion can be yes or no. It also inspires me to do something I’ve never done before. Like this! First I nixtamalized some Wapsie Valley dent corn from @grownycgrains (thanks for the idea, guys), roasted/seeded/steeped/puréed three kinds of dried chiles from @evolutionaryorganics (they have the most luminous peppers, seriously, just check out their ig), trimmed some pork shoulder from @bradleyfarmnp (and threw in some of that smoked skin, Ray, just because, and some of those neck bones to boot), and made this smoky, spicy, earthy pozole. In the end, I wondered if it was right. Did I make this correctly? Does it taste like pozole should? Then I remembered the great folks I got all this fine food from. Yeah, of course I did. Of course it does.